Such a Long Journey

Such a long journey

Zarina Hashmi dwells on the experience of displacement and continues the search for home in her sculptures and paper works, discovers Deeksha Nath I walked out of New York based Zarina Hashmi’s Solo at Delhi’s Gallery Espace with my head full of stories and my heart pierced with her line, which connected the unanchored bits of my being.

The strongest work in the exhibition was Blinding Light (2010) a large rectangular piece of paper coated with 22 carat gold leaf that had thin vertical slits at rhythmic intervals. The simplicity and the magnitude of the work left one with the feeling of having received darsan. It might even be seen as a modern-day icon shorn of the elements of contestation namely deity and site

Hashmi’s work chronicles her journeys and the desires that motivated the “The diptych Travels” with Rani (2008) which archives the excursions the artist undertook with her sister is representative of the spare monochromatic style one associates with Hashmi. In one work the linear route of the journey is mapped in black onto a list of names of cities and towns written in the the nasta’liq script. The other shows the same route in white on a black background. How are we to view this act of blackening out the names of the towns so meticulously written in the other work?

To answer this we need to dip into Hashmi’s own migrations and how they have shaped her preoccupations. She was born in 1937 in Aligarh, India in 1959 Hashmi’s family migrated to Karachi Pakistan and for several decades the artist has lived in New York USA. It is from these three nations that she draws a self which is in a state of constant negotiation for a definition. In much of Hashmi’s work the question of identity in the face of displacement continues to be primary one. This concern however doesn’t simply connect a specific identity claim with borders, linguistic or geographic, but it seeks to answer abstract questions about developing an identity, rooted in community as constructed through words, rather through what the words represent. Thus Delhi Aligarh Lahore and Agra are not simply cities and towns Hashmi and Rani visited. In their naming and in their disappearance in the diptych they become sites of longing and memory, as does Urdu which is slowly vanishing in its birthplace Delhi. In Cities I Callled Home (2010) a portfolio of five woodblock prints Aligarh Bangkok Delhi Paris and New York, are depicted through their road maps Being essentially non-narrative one searches for clues that might indicate the artist’s thoughts experiences and memories held within their un-named streets. The skeletal structure of a city poignantly highlights what the artist has said repeatedly – that at the heart of her practice is her desire for ‘home’ which, is both a place and an idea. This mobile home a site of longing connects to the broader discourse on the condition of exile whether voluntary or forced that has resulted from geo-political divisions in the past century. While I am not a refugee, an asylum seeker, a migrant, an immigrant or a person in exile I appreciate the rootlessness that these lines unanchored by nomenclature or symbol foreground

In 2006 Hashmi made Shadow House which consists of two large vertical sheets of Nepalese paper – one cut into a a grid and the other with several rows of slim vertical slits. These beautiful and gossamer works seem fragile to the touch and bring with them a realisation that Hashmi mainly addresses the past. She alludes to homes that could have been as opposed to homes that were It is with this slender distinction that she problematises the very equation of ‘home’ with ‘shelter’. Having led a somewhat nomadic life the artist’s notion of home is of a space one inhabitates at a given time – a residence a studio a vehicle – rather than a permanent proud possession. It is subject to the vulnerabilities of change and is as much an idea as a grid plan or lines drawn on paper. 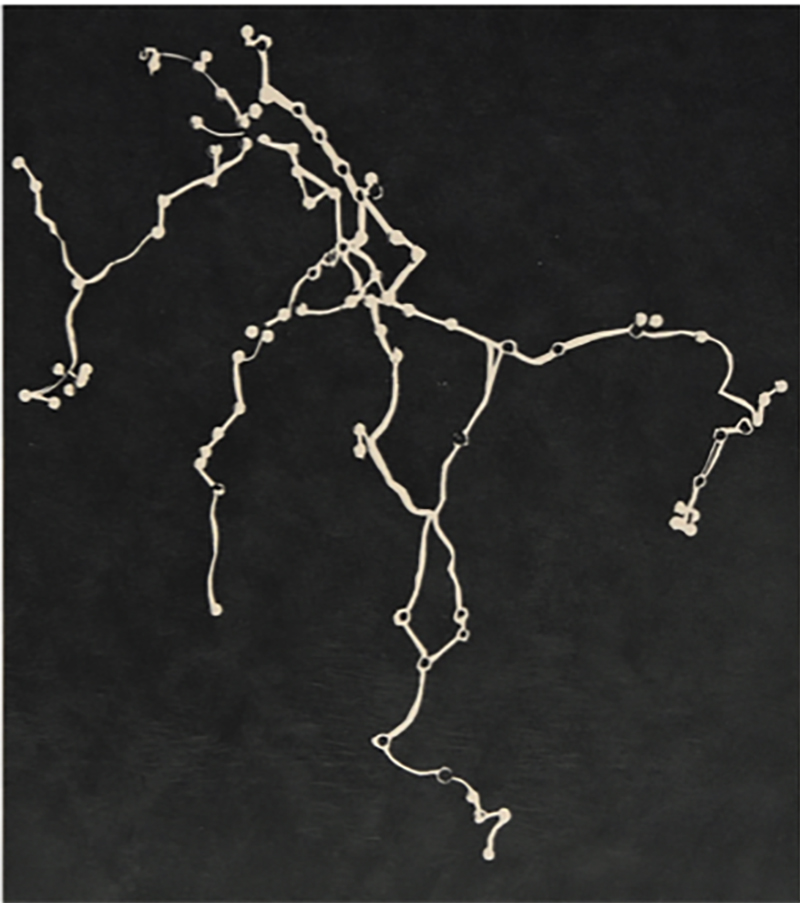 Hashmi uses a geometric language an a variety of methods: she draws paints prints embosses and cuts forms out. Paper is the cornerstone of her practice, which she has likened to skin noting that it “can be stained pierced and moulded”; it has the “capability of breathing and and ageing” and is fragile and resilient. What she does not say and I will take that liberty here is that, paper like skin has an ethnicity examples of which are abundant in Hashmi’s practice – she uses Nepalese paper, Okawara paper, BFK white paper etc. While she touches on subjects of loss bereavement and memory from her own experience she also refers to larger communities displaced by state disputes on issues like national borders and religion. There is here also the grief of un-belonging as it relates to the memory of belonging

Schlesinger had an interesting past. He knew the Nazis would rob him of his art collection. So he rolled the canvases of the great Austrian artist Oskar Kokoschka in dirty newspapers and got them safely across. The Nazis took away his money and his belongings, but did not open this bundle! He used to constantly say, “I miss my collection.”

In comparison to the paper works the sculptures at the show had little impact, Noor (2008) a wall hanging of gilded light bulbs fashioned from maplewood seemed obvious in its use of material, its form and message. Tasibh (2008) an extra-large looped gilded rosary of beads felt awkward, but River of Tears (2007) a leaner rosary made with imitation pearls was poetic and intimate It seemed to inspire a private exchange between the artist and the viewer. Both sculptural works though similar in form had very different effects which made me wonder whether it was a problem of scale, that the smaller pearl drops could be so lovely and the same form translated into large cylindrical gold seem so monstrous.

The exhibition reinforced the idea that the journeys we revisit even someone else’s shape us. Showing works from 2006 to 2010 the artist was in conversation with her past with her audience and finally with the the politics of the present.