Vaishnavi Ramanathan provides a brief survey of artists from Chennai who use words and scripts in their works. 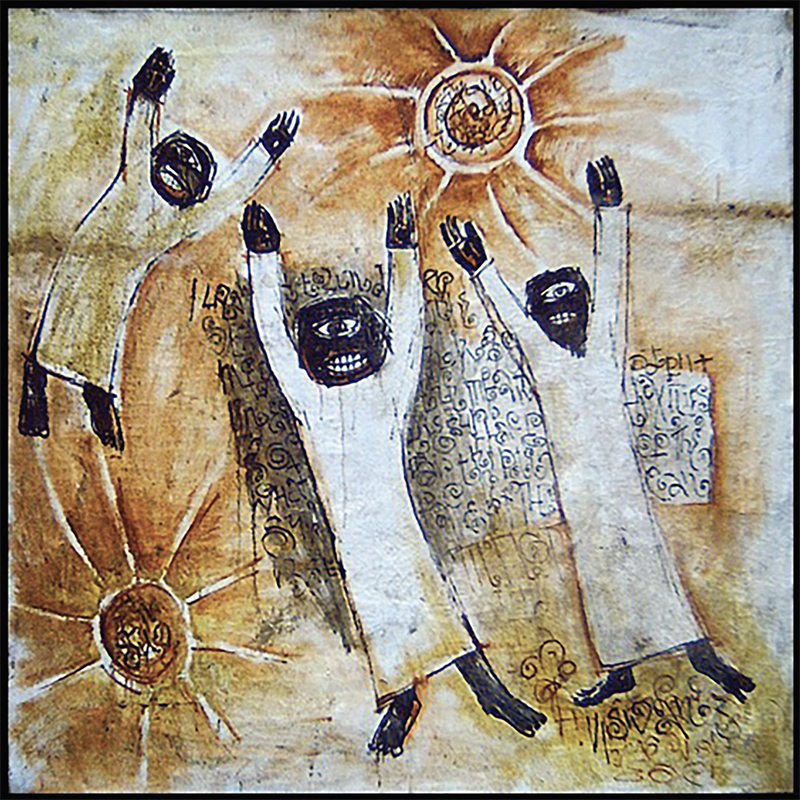 A significant number of artists from Madras/Chennai incorporate words and scripts in their art1. One reason for this is the dominance of the line, an element that forms the basis of writing and art, in the Madras Art Movement. With artists wanting to ‘write their paintings’ in the Madras Art Movement, scripts manifested both directly and indirectly in artworks. Moreover, the script is an expression of language which has played a key role in shaping Chennai’s profile; in the 1950s, both Telugu and Tamil speakers claimed the city belonged to their respective states. The city is also associated with Dravidian ideology, which among other things, argues for the cause of Tamil. In its name too, Chennai bears the mark of linguistic and cultural politics. Given these factors, it would be relevant to examine the use of scripts and words by artists from Chennai against the broader context of language.

K. C. S. Paniker’s Words and Symbols series from 1963 is considered a point of reference amongst artists using script in the city. Consisting of script, mathematical symbols and diagrams, “Paniker vehemently reiterated (the words) were not meant to be read but conceptually to meld with the aesthetic.”2 One can read the decision to use an illegible script from a modernist perspective and the desire to forge a vocabulary that would at once be rooted in local and international contexts. One can also read between the lines of Paniker’s choice to abstract script against a linguistic backdrop.

In the 1950s and the 1960s, the Madras School of Art (MSA)3, which played an important role in the Madras Art Movement, attracted students from different parts of the country, the neighbouring Southern states and from various corners of Tamil Nadu. As an artist and the Principal of the MSA, an institution where there was considerable overlap between the creative practice of artists and their role as teachers,4 his decision to create a syncretic language that had its own reality within the pictorial plane could be read as one way in which he forged an identity that transcended the particularities of language.

Another means by which the MSA helped create a sense of identity among students was through the annual tours to various sites of artistic and historic interest across the country. These trips helped students understand their own past and through that evolve an artistic identity that would be cognisant of the visual tradition of the country. The works created by Velu Viswanadhan from 1962-63 until 1965 following a visit to the Thanjavur Brihadeeshwara temple can serve as an example of this. The sight of temple walls covered with inscriptions inspired him to use abstract, two-dimensional motifs derived from scripts along with figuration. These works, which according to the artist, inspired Paniker to embark on his Words and Symbols series, were a point of transition to arrive at a geometric vocabulary without figuration. It is significant to note that in the case of Viswanadhan, writing first entered paintings through textiles as he experimented with the usage of script on a batik sari and then transitioned to painting6. The inclusion of script, a discipline distinct from visual art, through a medium that is traditionally considered outside the bounds of fine art, is very apt for the MSA, which was known for its interdisciplinary focus.

Until recently at the MSA, boundaries between departments were flexible and students could work across departments. This translated into an attitude that remained with students even after they passed out of the institution as they explored different creative fields. One of the areas among these was the world of literature. From the late 1960s to the 1970s, artists were involved in designing book wrappers and illustrations for Tamil magazines and books. Unlike the illustrations done for popular magazines7 that had been taking place since earlier, these were contributions towards ‘little magazines’. These little magazines were part of a larger trend across the country and sought to introduce readers to good literature by translating the work of international authors into Tamil and publishing the work of authors who were exploring new forms of writing in Tamil. Boundaries between creative disciplines were elastic as writers associated with little magazines believed in the interconnection of the arts8. Writers such as Sa. Kandasamy, who was involved with little magazines, contributed articles to Nunkalai, a magazine on the fine arts started by the Tamil Nadu Lalit Kala Akademi in 1981. Parallelly, artists such as Alphonso Arul Doss, R. B. Bhaskaran, C. Dakshinamoorthy and S. K. Rajavelu9 designed wrappers, logos and created illustrations for Tamil writers and publications. However, the most long-lasting association between art and literature in Chennai was in the works of K. M. Adimoolam. An artist known for his abstract paintings and his works in pen and ink, Adimoolam created book wrappers and illustrations for magazines and books for several decades. He was associated with the Tamil little magazine Kasadathapara which sought to break from the popular literature of the times and in the 1970s was the “frontline journal to emphasise the voice of dissent and disillusion” as far as society and politics were concerned10. As a member of the editorial team, or what constituted it considering the informal nature of a little magazine, Adimoolam brought in a new visual sensibility to print media11. He reinterpreted the historical vattaezhuthu script and made it readable to a contemporary audience. In order to create a visually engaging and historically rooted Tamil script, he referenced stone inscriptions, a permanent manifestation of script and palm leaf manuscripts, a transient form of writing12. The permanence and fragility of the two sources to which he referred also resonated with the life of the artworks he created. The writers behind the little magazines considered the wrappers and illustrations as artworks, both in their artistic quality and in the freedom the artists had to conceive them. However, many of the original drawings an artist like Adimoolam did for Ananda Vikadan and The Indian Express did not survive.

The life of an artwork that is painted and that which is meant for print media is in some ways markedly different. An original art work is singular in nature while one that is meant for print media may not survive in its ‘original form’ but thrives in multiple printed versions. An artist who created both kinds of artworks through the mediation of the written word was S. G. Vasudev. He was associated with the poet and translator A. K. Ramanujan and initially designed book covers for him and conceived a series of artworks, incorporating script and image, based on his poems. The multiplicity of print media that allows a piece of writing to be owned by many also ensured the circulation of Ramanujan’s works among other artists. Among those who were influenced by his writing was C. Douglas whose works especially from the 1990s include writing. The use of writing reflects both the artist’s fondness for reading as well as the way meaning is made in the world – through images and words. He uses writing as a conceptual tool in his works such as the Blind Poet and Butterflies to imbue a non-linear poetic quality to the image. But more importantly, he uses erasure as an aspect of his image-making practice, to bring in a sense of indeterminacy. He thus replaces the permanence of the written word with the fragility of the spoken word.

Words have different manifestations; each word is imbued with a certain import. Indian traditions distinguish between words that are heard and words that are remembered while giving precedence to the former since it is considered more authentic. Words that are remembered, a category that encapsulates the epics, is subject to the possibility of revision and individual interpretation. This fluidity entices artists to engage with it. One artist who did so was M. Reddappa Naidu who created works based on the Ramayana and the Mahabharata. In these works, he combined various episodes from the epics with the relevant text in Devanagari script, weaving together the images with the narration. But however tightly one may try to correlate the word-image with the theme, there is always a gap between the two. K. Muralidharan’s works playfully highlight this as he includes words that literally describe his themes. This is particularly so in his early rather than in his later works such as Andal where he brings together the image with the theme in a more allusive way. The directness with which he uses words in his early works not only lends a naïve quality to his images but also makes the viewer ponder over the relationship between words/images and the concepts they signify.