The Mumbai Gallery Weekend (MGW) is an event that comes at the head of a host of exhibitions in the city. It represents a pooling of energies of gallerists, artists, collectors and other movers and shakers of the art community. Begun in 2012, the MGW is an attempt at creating a new audience for Indian art and at injecting a healthy dose of excitement in Mumbai’s art crowd. Film screenings, shows, previews, talks and walkthroughs help contribute to a festive atmosphere.

Around 30 initiatives, mainly galleries, joined hands to put this year’s edition together. From January 16th to the 20th, a series of events got many people all agog and you saw many familiar and unfamiliar faces walk or drive from one venue to another. Some fine shows had been installed in the city – Atul Dodiya at Chemould Prescott Road and Navjot’s retrospective at the NGMA rubbed shoulders with Sahej Rahal’s Juggernaut at C&L and Manish Nai’s Paper City at Galerie Mirchandani and Steinruecke. Dodiya’s Seven Minutes of Blackmail comprises paintings created as a painterly hommage to the Master of Suspense Alfred Hitchcock and his 1929 film Blackmail. Here, Dodiya offers frames that look like scenes culled from the film. These shots hold residues of diverse acts of looking – at the screen, in a photograph, into the canvas. Cinema and Art, painting and film-making hold an intense conversation in the space of these works. 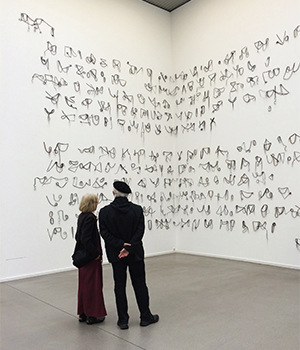 As you enter Rahal’s show at Chatterjee & Lal, you see these strange and sinister creatures staring back at you. There are cornered lions and there are wild boars (Obelix be damned!) and fanning peacocks and multi-eyed monsters. Along with these paintings, Rahal’s sculptures fuse big ideas with found material. His Venus of Willendorf, for instance, is created out of CNC machine-recycled plastic. Says critic Zeenat Nagree in her catalogue essay on Rahal, “…the rebels are here, brown as the earth, of unlikely pedigree and uncertain affiliation. In their eyes, we see the reflection of the two moons and tornadoes.”

Simryn Gill’s Soft Tissue at Jhaveri Contemporary featured Naga Doodles, Punch Drunk and Weeds of my parents’ garden. Gill explored spaces in different ways and also worked with found objects from around her homes in Port Dickson, Malaysia and Sydney, Australia. Naga Doodles comprised impressions of inked snake carcasses on papers. These snake bodies were found near her house and at times, these etchings held blood marks and residues of their body fluids. Punch Drunk comprised casts made by pouring plaster into the inner hollows of fruit and vegetables. Gill allowed birds and insects to nip and jab at the parts caught under or close to the plaster. Was this her way of framing a new take on symbiosis? It certainly offered a distinct way of looking at the hidden and obvious interconnections between flora and fauna. Weeds of my parents’ garden were photographs that evoked memories of wildness in a tamed patch of green while retaining a faraway quality.

The Earth’s Heart, Torn Out was the indefatigable Navjot’s grand retrospective. Curated superbly by Nancy Adajania, it recorded the various transformations that have occurred in Navjot’s practice. Navjot’s work is driven by a search for justice and is often collaborative. Two interesting panel discussions were organized around the show. Navjot Altaf, Dean D’Cruz, Ratna Gupta, Sajid Wajid Shaikh and Abhay Sardesai discussed Eco-Art, sustainability, architecture, material cultures, among other issues in one event while Geeta Kapur, Ranjit Hoskote, Nancy Adajania and Vasanthi Raman looked at the relationship between art and activism.

Four other impressive shows made up the bouquet. Raqs Media Collective displayed its layered Provisions at Project 88 (“…how to re-imagine the relation between the toxic and the true, between potential and plenitude”, said the press note) while the interestingly attired Shine Shivan showed his composite chariot and some drawings at Sakshi Gallery. Pratap Morey at Tarq and The Uncertain Tales, Premjish Achari’s curated show at Priyasri Art Gallery were definitely worth visiting. 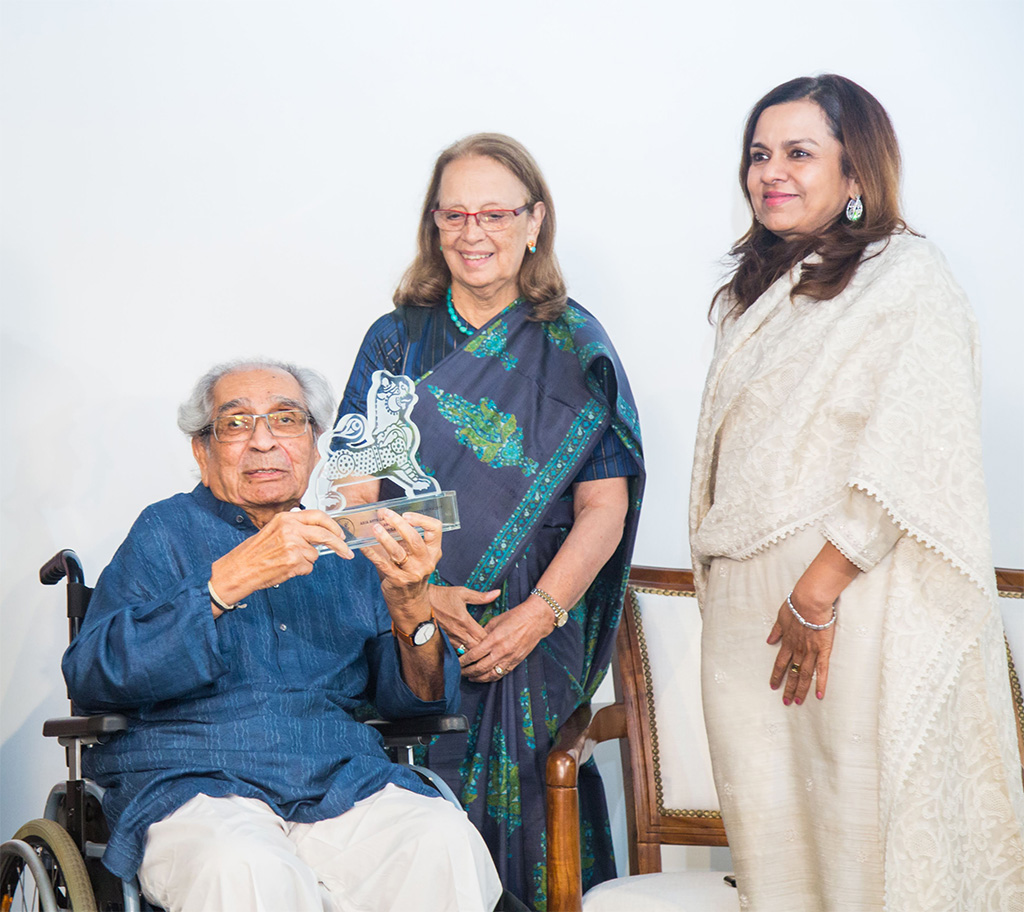