Mario D’Souza presents artists who use fabrics, threads and textiles to sew and stitch experiences of displacement, create objects of desire and frame portents of ecological disaster.. From three-dimensional fetish objects to tactile sculptures of female goddesses and fabric paintings predicting the end of time, several contemporary artists are using fabric, cloth and fibre in diverse art practices. It’s high time therefore that the conversation around textile and fibre art moves beyond rigid categories like art and craft, domestic and public realms, feminine and masculine impulses, and instead focus on form, concept, aesthetics, gesture and fate. In order to do this, we must admit our mistakes – our biases that led to the writing of dominant, largely male art histories. In the marginalization of the feminine, the queer, the economically and socially disadvantaged people, a large part of our history has got erased and fallen short of depicting the simultaneity, the depth and the nuances of complex expressive practices.

While this may take many years to annotate, correct and fix, we must constantly remind ourselves of what was overlooked. Since we talk about textiles we must also talk about the problem of conflating craft and domesticity. Textile and fibre art have long been dismissed as feminine, domestic and decorative modes. This prejudice was most acute towards women, who had, over decades, developed challenging conceptual practices across a variety of contexts, materials and techniques. Most of fibre and textile art are inflected by gender (and colonial) experiences. Practices of labour, affects of waiting and care, accidents of tear and recuperative customs of repair are pre-inscribed in the medium. In its firmness and fluidity, fall and folds, is a potent historical plane, charged with material from the past and ideas that are contemporary. Embedded here is a record of evolution and disagreement, a forging of new languages and vocabularies.

RegisterLogin to read full article
In these acts of weaving the future and preserving the endangered, lie the resistance and resilience of textiles – a firmness and malleability that material histories offer. It is to this advantage that Mrinalini Mukherjee (1949 – 2015) surrendered her forms – natural, yet wild and vulnerable, and fecund. In the technique of laboriously knotting by hand, Mukherjee often relied on chance and instinct. There was no loom, just handmade armatures to conjure and switch at will.

Mukherjee grew up between the Himalayas and the arid forests of Santiniketan, watching her parents Leela and Benode Behari Mukherjee at work. She later studied mural-making under K. G. Subramanyan in Baroda. This, along with her friendship with Jagdish Swaminathan, was crucial to her recognition of the natural world as a mine of metaphors. A local variety of hemp called ‘shani’ – stretched and tightened – went into the making of her ‘deities’, large and commanding. Mukherjee experimented with fibre, jute and hemp at a time when these materials were not used widely by other Indian artists. Her semi-abstract fibre sculptures explored the power of the divine. They were also conspicuous expressions of female sexuality, with their several undulating folds and contours concealing and revealing vaginal openings. In her free weave was the possibility of becoming, an interpretive evolution that seemed to continue well after the work was finished and hung. Hanging also offered freedom to her entities, as they navigated space, touching and sometimes folding out over the ground. Her sculptures were always aware of their connection to the earth and its force of gravity; the language of exploration was intuitive, instinctive and erotic. 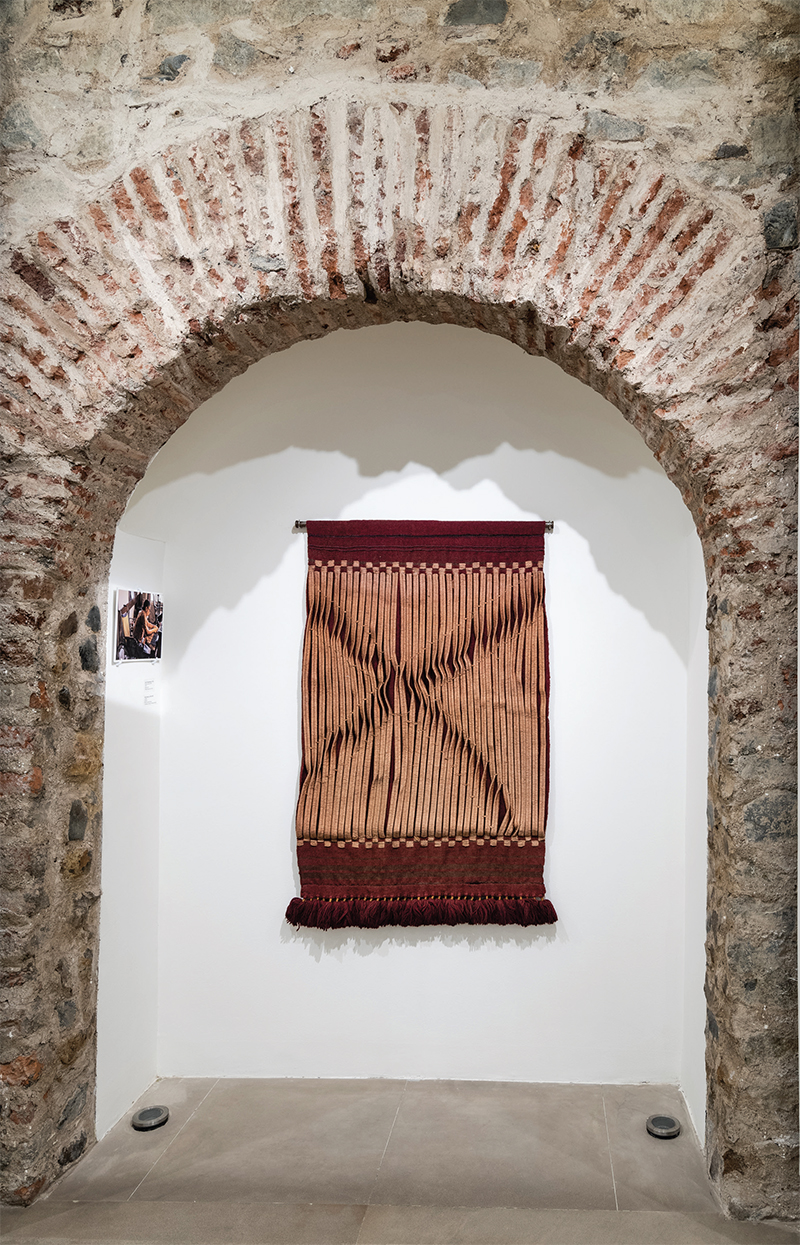 This relationship between the natural world and the gesture of weaving also inspired Monika Correa’s journey. In the 1960s, for many years,the sculptor Piloo Pochkhanawala organised the Bombay Arts Festival. K. G. Subramanyan and Nelly Sethna, amongst others, were invited to participate in this multi-arts festival. Pochkhanawala insisted on the representation of textiles besides sculptures and paintings and Correa’s handspun wool work titled Original Sin was included in one of the shows. This was a watershed moment in the pioneering artist’s largely quiet career.

In 1962, on a visit to Finland, Correa had encountered the weaving of the deep-coloured, thick wool ryijy rugs. Months later, she met the renowned weaver Marianne Strengell, the Finnish-American Modernist textile designer, who taught her the fundamentals of weaving. In the coming years, Correa was to abstract forms from the abundance of nature to depict the sun, moon, clouds, trees, roots, snow and water in her works. In letting go of the reed, Correa was to work against technique and method itself – an act of courage that paid off in many measures, investing her work with intensity and a lively pictoriality. The reed-less weaving process allowed her to move freely, to choose her own course. In this uncertainty was a growing language, one that was her own and in her control. There was a minimalist tendency here that relied more on the simplification of form than on abstraction; there was also, however, a fascination with motion, and the desire to capture the transient, fugitive moment. Holding on to their own measures and metres, these experiments developed as distinct vocalities for both Mukherjee and Correa. They continued to distinctly converse with Modernism, negotiating with principles of frugality and simplicity to evolve a new form. Here was a dedication to material and an acknowledgement of its possibilities and limitations – a working with and around the media. There was also the desire to plumb local practices at odds with the grand global aspirations of Modernism. This was not a dismissal of this aspiration, but a strong preference.