Loom of Life, textures of Time

Loom of Life, textures of Time The first object that catches my eye in Monika Correa’s flat on Nepean Sea Road occupies a chunky part of the living room. The horizontal loom has been part of the space that has doubled as her studio for over fifty years.

It was in 1962, while accompanying her husband, the famous architect Charles Correa, to Boston that Monika stopped over in Finland. Charles had a four month-long teaching stint at MIT. It was this trip that set her on a journey that would define her life. She had been enthralled by the ryijy, traditional Finnish tufted rugs, that she had seen at a weaver’s workshop in Helsinki. Monika was keen to learn weaving and through György Kepes, a painter and professor at MIT, she got a chance to meet Marianne Strengell, one of the most noteworthy mid-century textile designers. Strengell had recently retired as head of the Cranbrook Academy’s esteemed textile department after teaching for over 20 years. She decided to take Monika under her wing. Fast forward to 2013. Weaving can be taxing on the shoulders and the back. Monika (b. 1938) had been working quietly but consistently. Thanks to the insistence of her husband and the persuasive powers of gallerist Shireen Gandhy, she spent three years creating a new body of seminal work that was presented as a solo at Chemould Prescott Road. The aging loom was being resurrected.

Homage to Kepes (2012) was one of the 34 works exhibited at the show. It was bold and stark, and the luminous colours were reminiscent of Rothko’s canvases. The weaves not only expressed a gratefulness to Kepes but also brought together two features of Monika’s journey as a weaving artist. The fuchsia loop piles mined the flourish of Finnish long-tufted tapestries and explored the desire to further plumb the medium; the central orange and red meandering weaves expressed the dynamic framescape of memories in a technique she had cultivated over time. 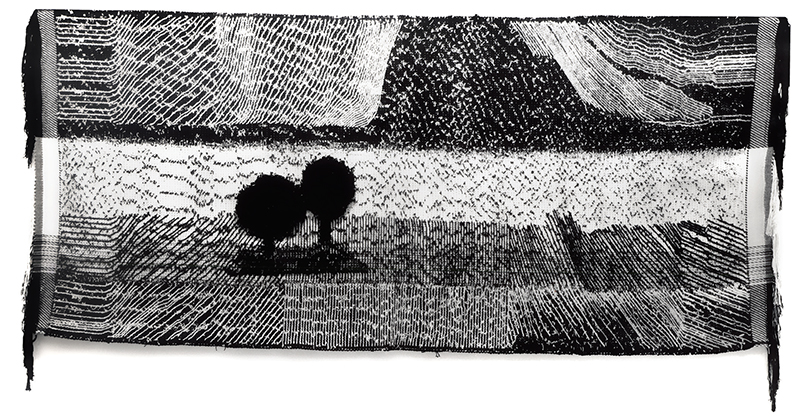 Monika returned from Boston in 1962. She joined the Weavers’ Service Centre in Mumbai to continue her study of weaving. Her time there overlapped with artist and educator K. G. Subramanyan’s; he was working on fibre sculptures that deeply inspired her. Back in America, the Fiber Art movement of the 1960s had taken a turn from a Bauhaus-influenced utilitarianism towards expressionism. Working with threads had acquired a new anti-establishmentarian charge and women artists like Anni Albers, Sheila Hicks, Lenore Tawney, Claire Zeisler and Kay Sekimachi worked towards an unorthodox exploration of tapestries.

Axis Mundi (1997-1999) is a significant example of Monika’s large-scale work; it is 12 feet wide and 8 feet high, created in several parts for the Sarjan Plaza in Mumbai. Pictorial in its form but allowing for an abstractness created through pixellated squares, the tapestry imagery dramatically changes depending on one’s viewerly distance. As mentioned earlier, architecture has been a special reference point in Monika’s work – the striking red Jamshedpur (2012), for example, with its suggestion of a form that is both insinuated and defined, responds to the idea of capturing the objectness of buildings as a series of ripply hints than as a catalogue of solid facts. Interestingly, the deceptive emergence of three-dimensional forms in such an understated but visually illusionary way reminds one of some of the Op Art works of the 1960s.

In the early 1980s, one of the most profound interventions Monika carried out was removing the reed, a comb-like structure that exists in the horizontal loom to keep the warp threads equidistant from each other. Not having learned weaving formally at university, Monika never felt restricted by any technical or psychological barriers while experimenting. She was determined and rebellious and figured her way out, even when specialists questioned her ideas. Removing the reed and changing the tension between the warp threads help contort the weft threads flowing through a piece. Most of Monika’s pieces use a bulky, handwoven woollen weft thread (ordered from Panipat and dyed in Mumbai) that distorts the delicate cotton warp, unaligned and unhindered. One can notice her experiments in removing the reed in the triptych The Banyan Tree (1984). The energy in the meandering warps is enhanced by the contrasting black and white threads. In 1987, weaving was abidingly seen as a craft and not as an art form. Unfortunately, it still isn’t. In spite of heavy opposition by the acquisitions committee, The Banyan Tree became the first weaving piece to be collected by India’s National Museum. Later, in 1996, the Constitutional Court of South Africa commissioned Monika to make a similar piece. These notable acquisitions and commissions were an affirmation of Monika’s determination to change the process of weaving in various ways. In the late 1980s, she continued her experimentation with the reed, removing it halfway through her pieces. In Saligao (1985), the tapestry is woven sideways with only the left half of the reed in place. The unreeded part approximates the haziness of the sky.

In the last few years, Monika’s work has shed pictorial depiction. The meandering warp is often the expression itself, evoking feelings of abdicated control, swaying and liberating. Bold monochromatic pieces often index the weaver’s hand, making visible each and every warp and weft. Another technique used strategically by Monika is the extra-weft. The dynamism, dimensionality and depth of the landscape tapestry The Killing Fields (1985), for example, are impressive. Monika achieves this by looping the extra-weft strands on to the next line, creating perspective segments that define the rice fields.

Now in her 80s, her works continue to be acquired by international institutions like The Museum of Fine Arts, Boston, The Museum of Modern Art and The Metropolitan Museum of Art, New York. She continues to experiment with weaves and designs, silently negotiating structures and creating energetic networks of lines and colours. In the words of the renowned crafts and art historian Jyotindra Jain, “Monika Correa has developed the medium into an exalted art form, at once transformative and expressive.”