In a paper titled “Fearful memories haunt mouse descendants” published in Nature, Ewen Callaway discusses how experiences of trauma can carry across generations genetically. While this is not being talked yet as an incontrovertible truth, there have been several experiments which have studied the idea of epigenetic inheritance and have found evidence favouring it. While the study with mice seems to be yielding more solid results in favour of this idea, it is difficult to ascertain this with humans. But it is nevertheless significant that preliminary studies with grandchildren of Holocaust survivors have indicated that there may have been a genetic transmission of the traumatic experiences that the survivors went through. There are, of course, social and personal/familial modes in which these experiences are shared but the force with which experiences of the Holocaust or the Partition expresses itself two or three generations later in the affected communities lends credence to the idea of an epigenetic basis.

Reena Saini Kallat’s show Blind Spots at Chemould Prescott Road, Mumbai, from the 29th of November to the 28th of December, engages with themes of division, polarisation and partition of land and people across the world. Her preoccupation with these themes goes back to her own connection, through her family, to the Partition and the resultant displacement.

How deep are these wounds? Are they, as some neuroscientists think, coded in our genes? Are our genes being overwritten, even as we speak, by our own violent, divisive present? Or does a story of Partition suffering my grandmother shared with me leave a deeper mark on my soul? And, much more importantly, through the sharing of these memories, can we move into a collective space that can heal and pave the way for a saner future? Can we even collectively imagine such a future consistently and coherently? 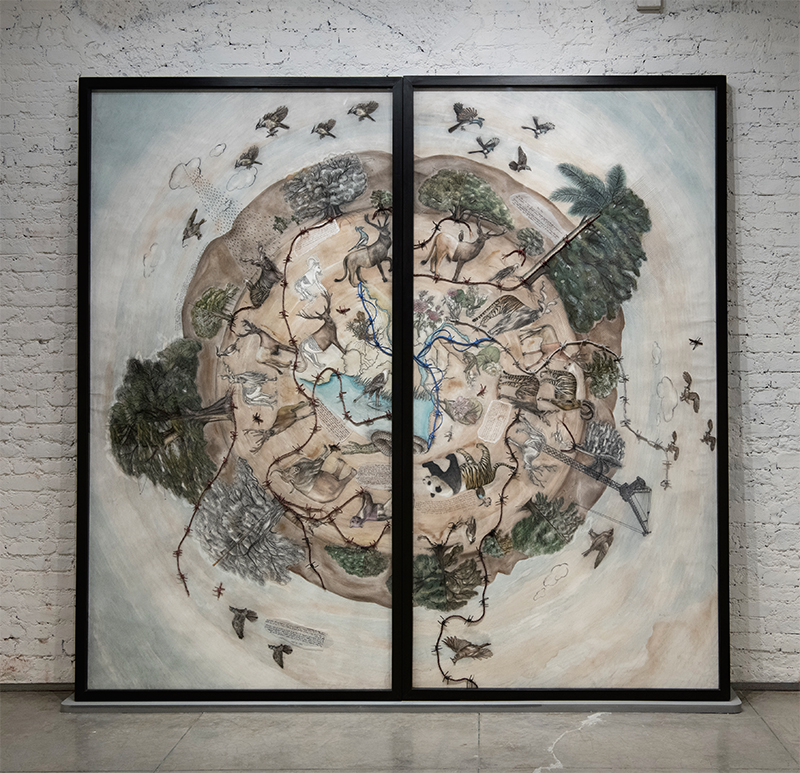 In a six-channel video installation Blind Spots, Saini Kallat draws attention to the blurring of our ‘vision’ that has obliterated the fundamental values of liberty, equality, freedom and justice from our collective memory. The installation uses the Preambles of the Constitutions of seven pairs of conflicting nations from around the world. The six channels then transmit letters on a screen in what resembles eye charts that optometrists use for vision tests. As the letters appear on the video as on an optometrist’s screen there is an audio accompaniment with readings of the Constitution Preambles in different languages that are beamed through sculptural installations. Seemingly random letters come together to form words which are common to the text of the Preambles of these nations and disappear no sooner than they appear. In the process of getting obscured, they remind us of the shared democratic values that have been forgotten and, at the same time, gesture towards a myopic vision that years of divisiveness and hatred have contributed to.

Viewed in conjunction with other works, this work also offers an incisive comment on the selective modes in which memory operates: while memories of the Partition survive in communities that have had direct experience of it, memories of the commitment made to a shared set of ideals on which the foundations of the nation are laid have been erased. Saini Kallat points out to our ability to forget to draw attention to what we choose to remember. It is reminiscent of Milan Kundera’s meditation in his book Testaments Betrayed: An Essay in Nine Parts that suggests that remembering is not the negative of forgetting. Remembering is a form of forgetting. In the present context, it is the shared cultural and social histories of  peoples that are forgotten and only those memories are stoked that lead to narratives of revenge, retaliation and revanchism.

Saini Kallat chooses to build the socio-political concerns of her work on forms that are elemental: sight and sound, land and water. Other than the audio-sculptural installations used for Blind Spots, there are two other sculptural works that use only sound – Chorus I and Chorus II. Saini Kallat has created sculptural installations that are fashioned in the manner of acoustic location devices that were used in the early 20th century to track enemy airplanes. But then the artist uses these devices to work as large headphones that play bird sounds. She brings together the sounds of national birds of conflicting neighbouring nations in an attempt to emphasise the primacy of habitat and environment over nation and state.

The prominence of place in the show is accorded to Leaking Lines – a set of ten pairs of framed images, each pair depicting a boundary line between nations from across the world. When we approach a map of a geographical area, we should bear in mind Rene Magritte’s cautionary note about the treachery of images. A map is a representation of a geographical region but only a representation. It is possible to cut the two-dimensional image that a map is with a line: for the region that is so divided this is a disaster. The arbitrary manner, fuelled by the arrogance of imperialism, in which such divisions were made and lines drawn is brought out poignantly in this set of works. In each pair, a framed photograph of a landscape so divided is accompanied by a text describing the creation of the division. Under this is placed another frame consisting of disjointed networks of wires – often signifying connection, they are in these images, used to depict rupture. Why the artist has chosen to besmirch the text to make it illegible is, however, not clear.

In a deftly executed diptych titled Cleft, Saini Kallat evokes an imaginary landscape that has been partitioned and then sets about trying to put together a narrative of hybridity by imagining new species of flora and fauna that emerge out of a combination of one half of a species from each side of the border. The resultant new species form the foundation of a new form of resistance to the divisive politics of borders but there is a residue of a portmanteau literality that evokes memories of the opening scene of Serbian filmmaker Emir Kusturica’s epic Underground.