Art and the Zen of Motorcycle Maintenance

Art and the Zen of Motorcycle Maintenance

Quixotic and intrepid, Tushar Joag’s fifty day journey from India to China engrossed all who followed his travelogue, which he updated almost daily on the blog Riding Rocinante. hod and madness in the project with Girish Shahane. Tushar Joag: When I was invited by Chaitanya Sambrani to show in China (Place · Time · Play: India-China Contemporary Art Exhibition, curated by Sambrani, was held in Shanghai from the 30th of October to the 20th of December 2010), the idea came to me that I could travel by road, following travellers we learned about in school like Fa Hsien and Hsuan Tsang. I’m not very good at riding motorcycles, though I owned one when I was in college. And I’ve never used a sidecar before. There was also the issue of driving in China on the other side of the road which created its own complications. So you could say I was underprepared.

G. S.: The blog describes some extremely cold places. They are probably impassable much of the year.

T. J.: Yes, there’s a small window when a trip of the kind I planned can be made, and I got through just before it closed.

G. S.: Riding Rocinante was obviously an art project, but can it be described as an art work? Is there some physical element to it apart from the travelogue?

T. J.: I can’t create very conceptual art. I feel the need to make things. And so I planned to create an installation in Shanghai based on my travel. The final work involved two metal cut-outs, one of a horse shape, and one of myself lying curled up. Around these I placed parts of the dismantled bike and objects I’d collected on the way. To give an example of what these were: One thing that surprised and annoyed me in China was the lack of traffic signs. I could memorise pictograms and manage where signs were present, but I’d often come to a T-junction and find no indication which way to go; since nobody speaks English, communication was hard. Getting directions required removing my helmet, gloves, and fishing out a notebook and asking people for the address marked on it. To avoid this, I took to having someone at the places I stayed write out my next destination in large letters, and I’d wear that as a patch on my jacket, so all I needed to do was to point to it. These patches were part of the final installation. Also, early in my travel, when I changed a tyre, I kept it. This wasn’t because I felt I could use it later, I just didn’t feel like throwing it away. Although this weighed the sidecar down quite a lot, I kept tyres and other parts that malfunctioned, and in the end displayed those as well.

G. S.: How did the concept for the final project evolve during your time on the road? 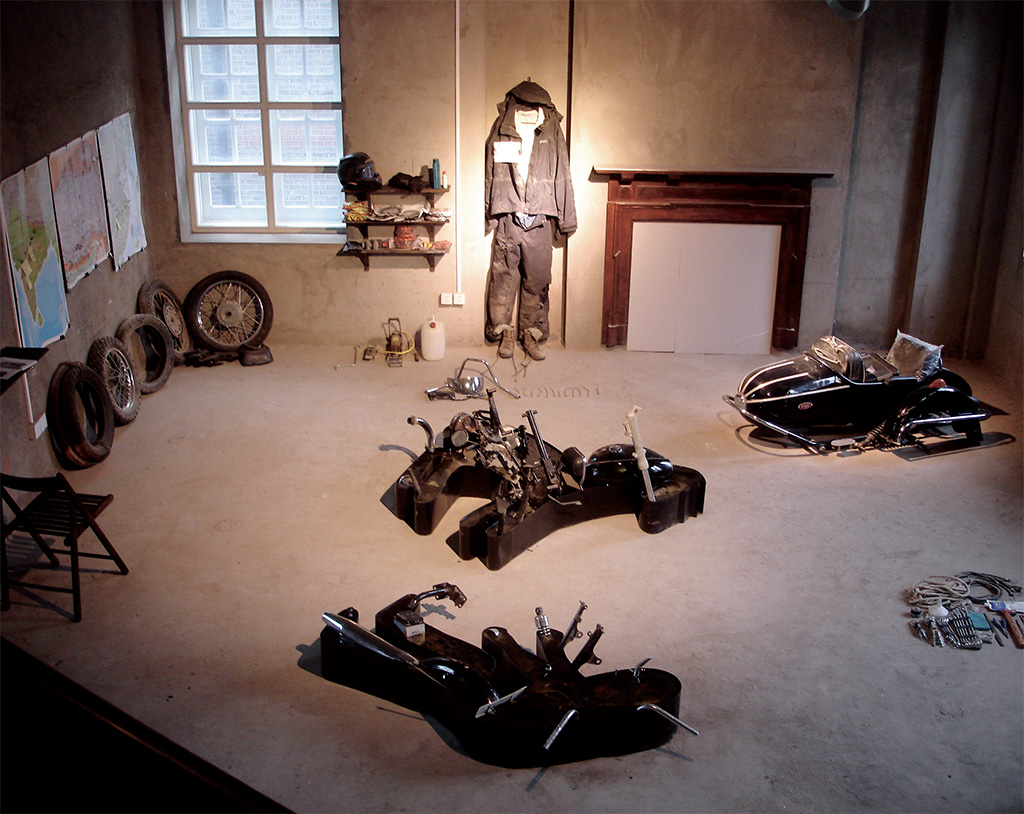 T. J.: Actually, I don’t think it evolved at all. The basic idea was in my head when I left. And I worked out the rest after I reached Shanghai. On the road, I was completely preoccupied with getting to my next stop. With the exception of Tibet, when I had company because of Chinese government rules, I was on my own throughout, often in isolated places that were very cold or pouring with rain. All I could do was continually hope my rickety bike didn’t break down. Between concentrating on this and absorbing the landscape around me, I had no mental space for thinking about the artwork I was going to create.

G. S.: The project involved connecting the Sardar Sarovar dam and the Three Gorges Dam. How did the connection evolve in your mind and influence the work in Shanghai?

T. J.: One of the striking things about the landscape around the Narmada dam is the trees that have been submerged: tall trees with only their tips sticking out. The Three Gorges dam is a big attraction for domestic tourists; some come to admire the structure, others to lament what has passed. I wanted originally to mimic that sense of submergence by immersing the dismantled motorcycle in a huge cutout metal horse. But some technical issues prevented that from happening.

G. S.: Did the journey change your perspective?

T. J.: It’s hard for me to express how my perspective has been changed, though I can feel it has. After returning there was a period when I felt just numb; it was difficult to connect with things… 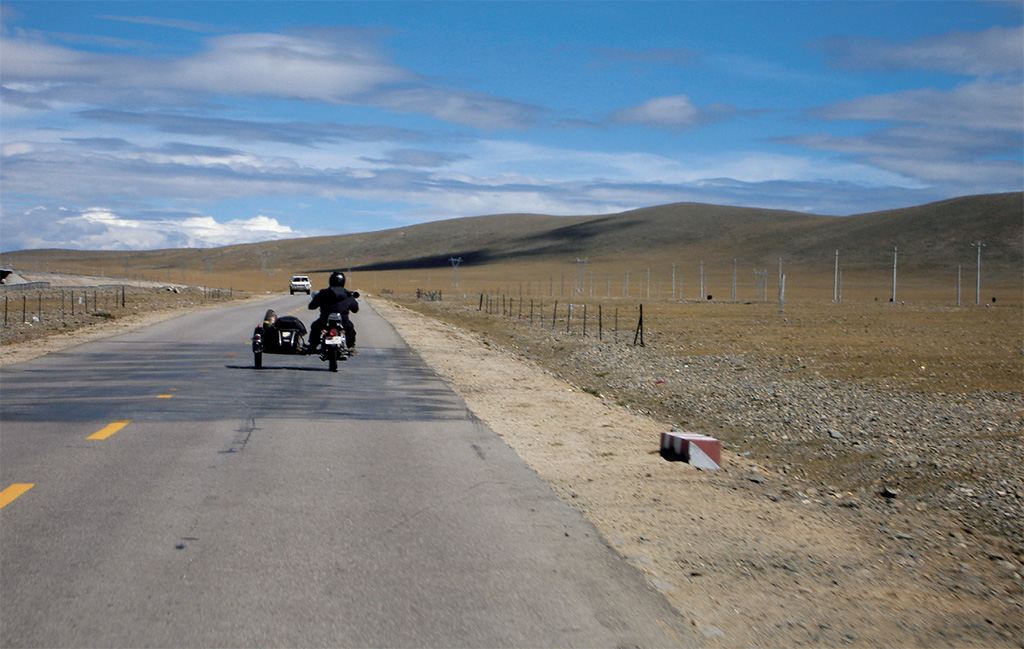 G. S.: I was thinking more about your political perspective, related to big dams, for example…

T. J.: Well, not so much about dams, but the picture of China I had based on visiting big cities in the past has been modified. People are very reluctant to speak their mind; there’s a real sense of fear in many places. In Tibet, I got a sense of how locals feel their culture is being crushed.

G. S.: You are an artist and also an activist. How do these two parts interact? Do they merge? Personally, I don’t believe interesting art can possess political instrumentality. Could a project like Riding Rocinante, deeply interesting within the context of contemporary art, affect the politics and discourse about dams?

T. J.: It’s important for me that my political beliefs inform my art. I think we as a society are too unequal, and I must express this feeling, this belief. But I’m not sure how effective it can be. I struggle with this all the time. I’ve destroyed a lot of my work because I felt it wasn’t up to the mark, not necessarily for political reasons but also as art. I was quite happy with the Unicell series, but otherwise my work has often left me unsatisfied.

In the Riding Rocinante project, I wondered if I’d let Medhatai (Medha Patkar) down in some way. When I met her and NBA activists, she said that if I’d given them more notice, they could have made more elaborate plans for me to meet people and understand the issue more deeply. I ask myself if the final result does justice to the struggle of these people, and I can’t say it does.